Bargain With a Bunny 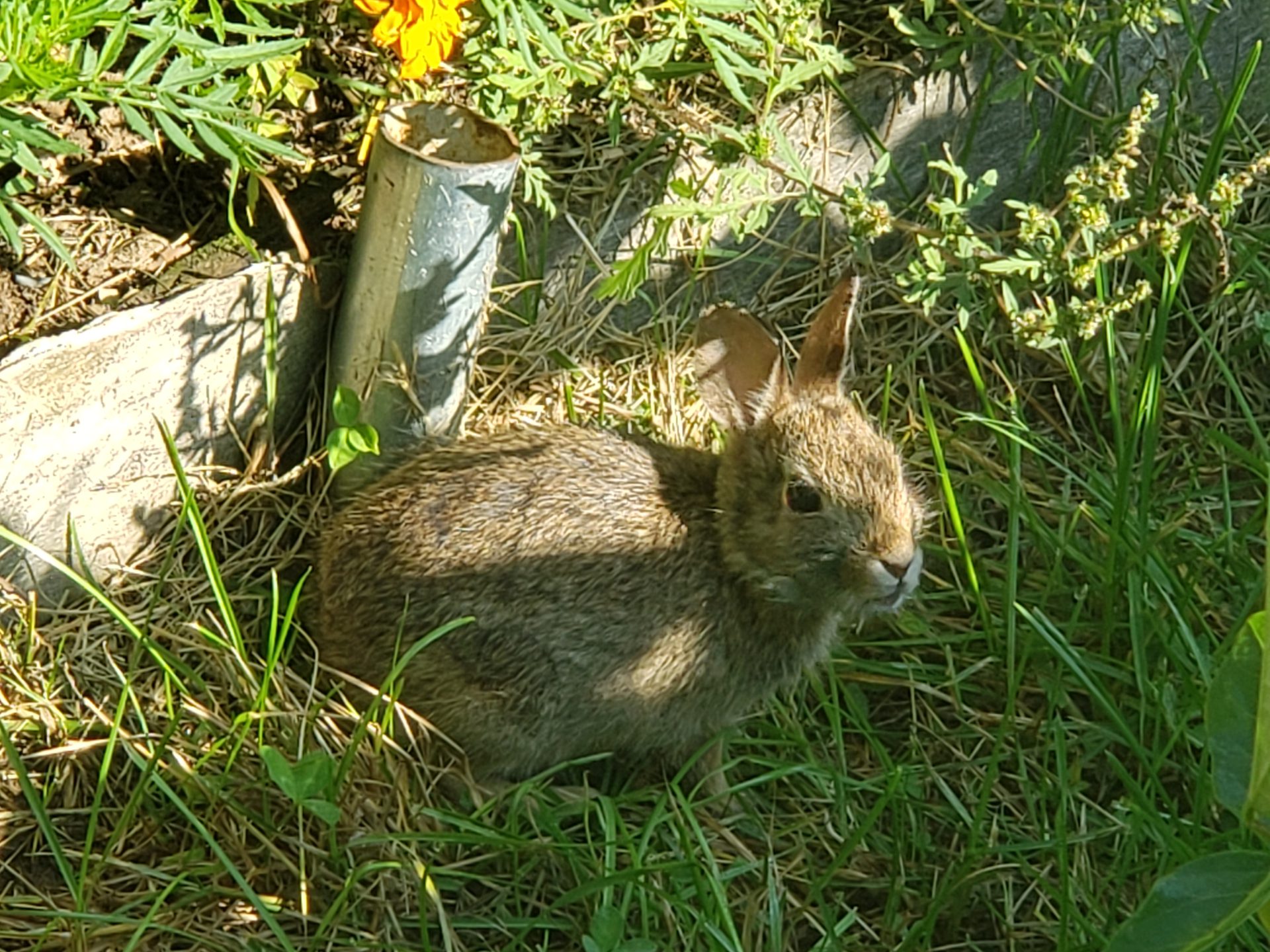 Please don’t tell my husband. We worked all spring to shore up the fence around the garden against woodchucks and bunnies. I planted my biggest garden ever with high hopes of a huge crop. And then, I learned that we actually fenced one bunny inside not outside.

My mom and stepdaughter saw it on the fourth of July. I gave them a tour of the garden and we went in the far corner where I just planted a new blueberry bush. There were already several bushes that were old enough they should have been taller than me by now. And yet they all struggled to get even a few inches above the ground.

Just this year, a friend told me that bunnies eat young blueberry plants. The blueberry mystery was solved since I knew bunnies got though our fence all winter. So many cold nights, my husband I would wake at 2 a.m. to a strange metallic sound. 2 a.m. is the hour that bars start closing down. If we didn’t live surrounded by a forest, I would think it was partiers spilling out into the streets and bumping into hollow dumpsters. But deer and raccoons aren’t normally known to drink a lot of alcohol.

After one snowstorm, I finally saw evidence of what made that sound. A collection of hippity hoppity foot prints showed the trail from an old barn to the wire fence right below our bedroom window. In one night, the snowy path was so worn down there must have been a whole parade of bunnies. Their plump butts were a tight fit through even the largest fence holes. As each bunny squeezed into the garden, it shook the loose wire fence just enough to make a metallic clang. We guessed it was a dozen or so rabbits that made the continual rhythmic rapping on the wire. With each bunny butt the sound went on a little longer and slightly louder right near the wall against the pillow end of our bed. They feasted and then made the return parade a couple hours later, waking us up again.

After the spring thaw, I reinforced our fragile blueberry patch. I put up everything but barbed wire and referred to it as Fort Knox. For a little added insurance I bought four more blueberry bushes and planted them in separate parts of the garden. I was showing off one of these insurance plants on the 4th of July when we startled a bunny out from neighboring leaves. We all jumped back in surprise, both the rabbit and us people. But the rabbit came to his senses much faster. He high-tailed it under the deck and all was forgotten.

Until the day I saw him again. I figured that little bunny escaped back out the way it got in to the garden. My husband, Mike, and I spent the rest of July digging fences two feet down under the ground. It was the only way to keep the woodchucks out, or so we thought. But that’s a story for another day. Apparently that little bunny never left. He had lettuce, kale, and swiss chard in a never-ending lush salad bar that must have been the stuff of rabbit fantasies.

We had a record amount of hot, rainy days this summer so I wasn’t outside that much. During that time the bean patch grew across a walkway and vined up the neighboring plants. It seemed to have ambitions about being a magic bean stalk. I figured who was I to get in the way, so I let it be. Little did I know that created ideal covering for the entrance to a bunny den.

It was late in the season when I saw something big and brown run into the garden bed. I was used to seeing chipmunks. Their population exploded this year. I found their golf ball sized holes everywhere. But this was too big to be a chipmunk. I bent down closer to the ground and peered under the beans. He stared right back at me but didn’t stop chewing. Apparently whatever reflex bunnies have to freeze in place doesn’t apply to their mouths.

There was a long quiet moment between us. I learned that you can’t stare down a bunny. They’re always afraid of everything so you giving them the stink eye doesn’t even register. I also had a couple other insights while gazing deeply into his bunny soul. He didn’t eat enough produce for me to even notice he was there. And I could live with that. I’d leave the bunny buffet open until the snow closed it down for the season.

But more importantly, I didn’t know how to get the bunny out of there. And I also didn’t really want to make the effort to try. I was raised at a young age to take the side of Peter Rabbit over Mr. McGregor. Even though I was clearly the same species as Mr. McGregor, that early indoctrination was very strong. At long last, I moved on with these important parting words, “I won’t tell Mike about you as long as you don’t eat my blueberries.”

← How Deep is Your Love?
Glimpse in the Mirror →